The Acer V5-552G-X414 is a viable everyday laptop, and it's more than viable when it comes to playing movies and low-resolution games. But the bendy feel of the touchpad continued to irk even after I'd had a few days to acclimate to it. And the inability to easily access the hard drive or memory stymies one of my usual suggestions for most users, which is to go cheap on the CPU and upgrade overall performance with an SSD (a component that's not available as an option at the time of writing).
Single Review, online available, Very Short, Date: 10/11/2013
Rating: Total score: 60%

The Aspire V5 has a plastics body and is slimmer and with 2 kg also lighter than the competition. Acer has targeted users looking for a portable machine. In many aspects, this device is average in its class and does not stand out. The 15.6 inch capacitive touchscreen features a resolution of 1366 x 768 pixels and supports 10-point inputs, which is perfect for the pre-installed Windows 8. Colors are bright and crisp, and the viewing angles leave nothing to complain about. The full-sized chiclet keyboard with number pad offers a decent typing experience. In addition, it comes with an extra- large clickable touchpad with support for Windows 8 gestures.

Inside the Aspire V5 there is a 750GB hard drive, which is a decent amount of storage, and a 1.8GHz Intel Core i3-3217U ULV dual core processor. The performance is sufficient when compared to competitors of the same price range. It can handle light multimedia tasks easily, but is not suitable for hardcore gaming. But, casual social games are not a problem. Considering how thin and light the build is, battery life is a concern. Unfortunately, the Acer Aspire V5 fares much, much worse than the competition here. Overall, this is a good looking, well designed machine for an affordable price. Battery life is its main shortcoming, but if that’s not an issue, the Acer Aspire V5 is great value.

A10-5757M: Quad-core processor with only two FPUs and an integrated Radeon HD 8650G graphics card. BGA version of the A10-5750M.» Further information can be found in our Comparison of Mobile Processsors. 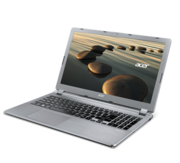 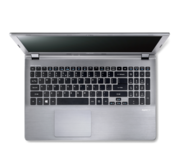 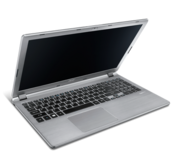 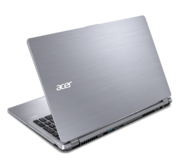 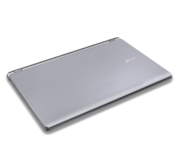