Acer's Aspire 6920G is a fully-featured media centre that offers powerful graphics, but a poor keyboard. If you're looking for power on a budget, then few machines come close to matching the Aspire 6920G-594G32Bn. It packs a lot into its well-made chassis, with only the springy keyboard and low-resolution screen letting it down.

T5900: Merom based Core 2 Duo that was later succeeded by the similar specified and Penryn based T6600.» Further information can be found in our Comparison of Mobile Processsors. 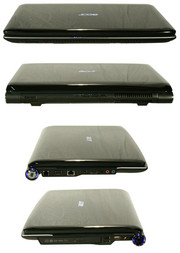