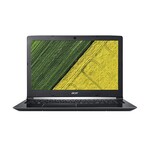 i5-8550U: Kaby-Lake-Refresh based low power quad-core processor. The four cores are clocked between 1.8 and 4 GHz (Turbo Boost) and support HyperThreading. The integrated GPU is clocked between 300 and 1,150 MHz. The SoC is manufactured in a 14nm+ FinFET process.» Further information can be found in our Comparison of Mobile Processsors.