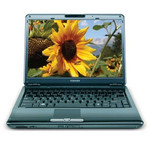 Reviews for the Toshiba Satellite U405

With a lineup of perfectly serviceable, but not exactly standout mainstream laptops, Toshiba's Satellite brand has long played second fiddle to the company's excellent Qosmio multimedia systems. Toshiba's thin-and-light Satellite U405 is a sleek alternative to the 13-inch MacBook, but is weighed down by excessive out-of-the-box bloatware.
Review Type Unknown, , Length Unknown, Date: 04/25/2008

A notebook is more than the sum of its parts. For several years now Toshiba has managed to make solid notebooks but they didn't excite our editorial staff ... until now. In years past Toshiba usually did a fine job "on paper" by delivering laptops with good components, but the "complete package" left something to be desired. Well, Toshiba was paying attention to that criticism and the result is the new Satellite lineup for 2008. The Satellite U405 is quite possibly the best 13-inch consumer budget notebook we've seen to date. Sure, the current configuration doesn't offer dedicated graphics for playing the latest 3D games, but the U405 is the most balanced overall package we've seen in quite a while. The U405 combines attractive styling, a gorgeous screen, a wonderful keyboard and touchpad, good port selection, and solid performance all at a price that rivals anything we've seen from the competition. The entry-level configuration of the U405 is priced at $767.20 compared to the entry-level configuration of the Dell Vostro 1310 priced at $747 ... but the U405 is a far superior laptop.
Mobilität gut, Display sehr gut, Leistung exzellent, Preis sehr gut
Single Review, online available, Medium, Date: 04/21/2008
Rating: price: 90% performance: 95% display: 90% mobility: 80%
70% Toshiba Satellite U405-S2830
Source: Laptop Mag

Despite the wonky facial recognition software, the Satellite U405 is a satisfying thin-and-light notebook that offers plenty of style and speed for a reasonable price. It’s a good choice for students as well as travelers, especially when you outfit it with the extra-capacity battery.
3.5 von 5, Leistung gut, Mobilität mangelhaft
Single Review, online available, Medium, Date: 04/17/2008
Rating: Total score: 70% performance: 80% mobility: 50%

74.67%: This rating is bad. Most notebooks are better rated. This is not a recommendation for purchase.