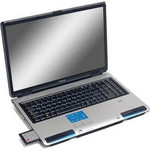 Reviews for the Toshiba Satellite P105-S921

Archive.org version
The 7900GS can handle the latest FPS games like a champ. The 1440x900 resolution allows you to enable antialiasing and anisotropic filtering to all your favorites. In many games it is twice as fast as a 6800Ultra/7800 Go GPUs. Toshiba finally gives us a true gaming laptop. After having huge 17" multimedia monsters like the Qosmio, they now offer one of the top gaming performance to boot. Perfect for Lan parties, or just showing off to your friends how much faster your laptop is to their PCs!
ausführlicher Vergleichstest von Notebook-Modellen; Test ist online abrufbar

Archive.org version
They say it's always the quiet ones that are the most dangerous. This very able dual-core gaming and media rig looks like a librarian of a notebook, albeit with a 17-inch widescreen display, but it boasts powerful Nvidia graphics along with a host of bells and whistles. With a price that hovers around $2,000, what's not to like? The exterior design is all business. The cover is a simple metallic gray, the interior a modest silver and black. Only a blue light emanating from the speakers gives any hint of the machine's ambitions.
eher kurz gehaltener Test; online abrufbar

Archive.org version
There have been essentially two things missing from Toshiba's PC lineup: a desktop line and a gaming PC. Now, I can scratch off the gaming PC because I have, in my hands, the new Toshiba Satellite P105-S921. It's the first gaming notebook from Toshiba, and it blends affordability ($1,999.99 direct) with very good gaming performance. It comes with nVidia's GeForce Go 7900 GS graphics chip, a step below the nVidia 7900 GTX found on our Editors' Choice, the Dell XPS M1710.
eher kurz gehaltener Test; online abrufbar

Archive.org version
Though Toshiba has recently dominated the field of desktop-replacement media machines with its Qosmio line, the company's entries in the realm of gaming systems (most recently, the Satellite P35) have been less than stellar. But the latest Toshiba laptop aimed at gaming enthusiasts, the Satellite P105-S921, is a serious contender; its gaming performance matches that of the Dell XPS M170, which, until today's release of the XPS M1710, had been our top-performing gaming machine. Better yet, the Satellite P105-S921 costs hundreds less than the competing Dell XPS M170 and thousands less than the top-of-the-line Dell XPS M1710. If you're a hard-core gamer who needs best-of-breed hardware for demanding games such as Oblivion or F.E.A.R. (and you have an extra two grand lying around), the XPS M1710 is the best gaming laptop on the market; for everyone else, the Satellite P105-S921 is a solid, affordable alternative.
ausführlicher Test mit Geräteaufbau und Testwerten und Bildern; online abrufbar

T2400: » Further information can be found in our Comparison of Mobile Processsors.

78.75%: This rating is not convincing. The laptop is evaluated below average, this is not really a recommendation for purchase.