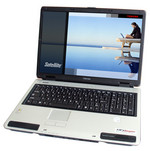 Reviews for the Toshiba Satellite P100-191

T2400: » Further information can be found in our Comparison of Mobile Processsors.

85.6%: This is a good rating above average. Nevertheless you should not forget, that 10-15% of all notebook-models get a better rating.