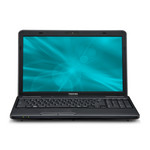 Reviews for the Toshiba Satellite C655-S5542

Compared with many of the notebooks we review, the Toshiba Satellite C655-S5542 offers mediocre performance and graphics. But for those who only need a system for simple tasks such as surfing the Web, checking Facebook and writing documents, this $399 system gets the job done at an almost irresistible price. If you can spend a few more bucks, we recommend the $479 HP Pavilion g6x, which has a second-gen Intel Core i3 processor, 4GB of RAM, a 500GB 5,400-rpm hard drive, as well as four color options. However, the Satellite C655-S5542 is good choice for those on a tighter budget.
Single Review, online available, Very Short, Date: 04/18/2012
Rating: Total score: 70%
60% Toshiba Satellite C655-S5542
Source: CNet

We think the Acer Aspire 5349-2635's fourth gigabyte of RAM, third USB 2.0 port, HDMI port, and $50 lower price outweigh the Toshiba Satellite C655-S5542's Bluetooth, so we're keeping the Acer as our Editors' Choice in the under-$500 category. But the Satellite is a solid contender for shoppers on a tight budget—as if there were any other kind of shoppers in this segment.
Single Review, online available, Very Short, Date: 03/30/2012
Rating: Total score: 70%

Entry level dual core processor for laptops with integrated graphics card (faster compared to the similar Celeron B810) and reduced features of the Sandy Bridge core (no Turbo Boost, AES, ...).