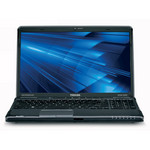 Reviews for the Toshiba Satellite A665-S6058

The Toshiba Satellite A665-S6058 looks no different from previous Satellite laptops, which we've come to know as affordable mainstream options for home and office use.

Upgraded graphics are a highlight of the Toshiba Satellite A665-S6058, a mainstream 16-inch laptop that can pull double duty as a mobile gaming system thanks to its Nvidia Optimus graphics and outstanding audio.