Reviews for the Toshiba Satellite A665-3DV

So what's there to say about the Toshiba A665-3DV? A lot, but much of what we have to say isn't that positive. The current (soon-to-be-outdated) 3D Vision notebook experience feels kludgy and tacked on with the A665-3DV, with a separate 3D emitter required. It usually works and when it does it looks fine, but on hardware like the GTS 350M it's more for movies and images than for gaming.
Single Review, online available, Long, Date: 10/06/2010
Rating: Total score: 50% performance: 60%
70% Toshiba Satellite A665-3DV
Source: CNet

We've seen laptops from the Toshiba Satellite A665 line before (more than once, in fact), and we've also previously seen laptops that incorporate Nvidia's 3D Vision technology. You can probably guess where this is going, as the new Satellite A665-3DV takes that familiar multimedia system and adds support for 3D Vision. Unless you're a huge 3D fan, the high price is a bit of a stretch for the 15.6-inch Toshiba Satellite A665-3DV, but we do appreciate the 3D Blu-ray playback.
Single Review, online available, Medium, Date: 10/05/2010
Rating: Total score: 70% performance: 80% features: 80% mobility: 80%

NVIDIA GeForce GTS 350M: According to the released informations, the Geforce GTS 350M should be just a renamed GTS 250M. In the Toshiba A663 it is however a bit lower clocked.

The Core i7-740QM is a high-end quad-core CPU for laptops (in 2010) with a relative small base clock rate and a high Turbo Boost max frequency of 2.93 GHz (for one core). Therefore, it combines the advantages of a slow clocked quad core CPU with a fast single core one. Compared to the faster Core i7 mobile CPUs, the 740QM only features 6MB L3 Cache. 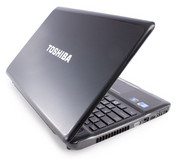