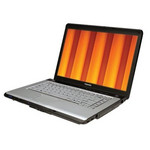 Reviews for the Toshiba Satellite A215

Archive.org version
Toshiba's latest mainstream laptop occupies the sweet spot between price and features, packing in a generous 250GB hard drive and 2GB of RAM for $999. The 15.4-inch Toshiba Satellite A215 also includes a Labelflash DVD burner that can burn text and images on your optical media, but it skips the brand-name Harman Kardon speakers found on the more expensive A205 model. Still, a more attractive sub-$1,000 laptop would be hard to find, making the Satellite A215 a worthy alternative to Dell's similar line of mainstream laptops. On the whole, mainstream laptops have traded the boxier looks of older models (such as the Dell Inspiron E1505) for slimmer, more attractive designs with tapered edges and rounded corners. As with the A205, we like the single long hinge that runs almost the entire length of the display, which feels sturdier than the typical two-hinge setup on most laptops.
(von 10): 6.7, Leistung 6, Mobilität 5, Ausstattung 7
Single Review, online available, Medium, Date: 08/16/2007
Rating: Total score: 67% performance: 60% features: 70% mobility: 50%
Toshiba Satellite A215 Review
Source: Notebookreview.com

Archive.org version
The Satellite A215 series is a new line of consumer notebooks being offered by Toshiba.  They sport variations of the AMD Turion64 X2 CPUs.  The A215 is a being positioned as a multimedia notebook with its large 15.4” glossy screen, large hard drives, card reader and webcam.  The A215 definitely has some hits and misses. All of which we will take a more in-depth look at in the following review of the A215-S4757.
According to Toshiba, the A215 is Onyx Blue in color, but it looks black to me.  Perhaps when you're outside in the sun there's a blue hue to it.  The A215 weighs in a bit over six pounds and is about an inch and a half thick.  That puts it squarely on average for the class.  Given its weight and size, it's not a notebook that should travel daily.  The back and forth to the office or the occasional night out seem reasonable.  I personally like designs that are simple and understated.  I think the A215 fits into that category.
Display gut, Emissionen sehr gut
User Review, online available, Long, Date: 08/13/2007
Rating: display: 80% emissions: 90%

ATI Radeon Xpress X1200: This is an onboard video chip and according AMD optimized for a good price/value. It is based on a X700 design but with less pixel- and vertex-pipelines. ATI Radeon Xpress X1200 is hardly apt for gamers. The graphic chip supports Windows Vista Aero surface and all 3D effects run fluently. Sometimes also called Radeon X1200.

> Notebook / Laptop Reviews and News > Library > Laptop Reviews Archive > Toshiba Satellite A215
Stefan Hinum (Update: 2012-05-26)
4
Working For Notebookcheck
Are you a techie who knows how to translate? Then join our Team!
Details here