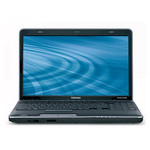 The Toshiba A505D lives up to its billing as an entertainment notebook. It can handle any video we threw at it and even light gaming. If you plan to use the built in keyboard for extended periods of typing you may be disappointed with the spacing, but since it is backlit and provides an OK amount of feedback, it is still better than those found on many similarly priced notebooks. In the end, this is a great notebook for college students or home users looking for an entertainment notebook. If you are looking for a notebook to take with you every day and use on-the-go — or are a picky typer — then this notebook is not for you.
Single Review, online available, Short, Date: 05/10/2010
Rating: performance: 80% display: 80% mobility: 40%

When dealing with a notebook like Toshiba's A505D-S6987, what we're really looking at is the value proposition. No one builds the perfect notebook and it's always going to be an exercise in compromises. Toshiba lists (or listed) an MSRP of $799 on their site, and that price is very steep when other AMD-based notebooks can be found for less.
Single Review, online available, Long, Date: 06/23/2010
Rating: price: 30%

Mixture out of two K8 based cores and K10 uncores (e.g. memory controller). Offers improved power saving functions compared to older Turion CPUs but still not as good and fast as a Core 2 Duo. The ZM-84 is similar to the ZM-85 but features a slower clocked HT link.

Middle class dual core CPU by AMD which features an integrated memory controller (400MHz DDR2) and is based (partially?) on the K10 core (desktop Athlon II). The performance should be compareable to a 2.0-2.1GHz Core 2 Duo / Pentium.