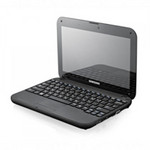 Reviews for the Samsung N310

Archive.org version
Although we initially liked the $449 Samsung Go (which includes a six-cell battery), we’re not nearly as fond of the $199 version sold through AT&T, whose four-cell battery doesn’t even last three hours on a charge. What’s more, for the same price you can get the HP Mini 311 from Verizon Wireless, which performs better, lasts nearly five hours on a charge via Wi-Fi, and, thanks to its Nvidia Ion graphics, delivers a stronger multimedia experience. If you like the idea of built-in 3G wireless, skip the Go.
Single Review, online available, Long, Date: 12/14/2009
Rating: Total score: 40%
75% Samsung Go N310 (sunset orange)
Source: CNet

Archive.org version
We've gotten to the point where mainstream Netbooks are a fairly rigid format. Slap together an Intel Atom N270 processor, 1GB of RAM, a 160GB hard drive, and a copy of Windows XP, and you've got your hands on essentially the same product sold by PC makers such as Dell, HP, and Acer. Samsung brings a different look to a generic Netbook build with the N310, but is there any good reason this costs almost $500?
Single Review, online available, Medium, Date: 09/03/2009
Rating: Total score: 75% performance: 70% features: 70% mobility: 80%
60% Samsung Go N310-13GBK 10.1-inch Netbook Laptop PC
Source: Comp Reviews

Archive.org version
Samsung's Go (also known as the N310) overall is a well designed netbook with a very nice feel. The compact design with rubberized texture is certain fairly unique especially for a six-cell battery equipped unit. The keyboard is one of the better on the market with a roomy and comfortable feel. The problem is that at $450, the Samsung Go is just priced too high compared to similarly equipped netbooks. This makes it only an averge overall choice unless the price comes down to a more competitive level.
Single Review, online available, Short, Date: 09/03/2009
Rating: Total score: 60%
Samsung N310 “Go” review
Source: Liliputing

Archive.org version
The Samsung Go has excellent build quality and comes with a nice suite of applications, most of which are actually quite useful, unlike the bloatware that comes with many PCs. The keyboard is well laid out and features large keys, and the touchpad is quite comfortable as well. But the Samsung Go is priced significantly higher than most netbooks with nearly identical specifications. The list price for this computer is $479. And even though you can often find it for much less than that, it still costs $50 to $100 more than many similar netbooks.
Single Review, online available, Long, Date: 08/29/2009
Rating: price: 50% workmanship: 95%
80% Samsung Go N310-13GB
Source: PC Mag

Archive.org version
Embattled by cutthroat pricing and limited in the parts they can use, netbook makers have to be craftier than ever to come out on top. The Samsung Go N310-13GB ($450 street) is dealt the same Intel Atom parts and basic features as every other netbook, but its looks might pique your interest. The bright orange exterior is one of four colors available with this model, and the edge-to-edge glass screen and "pebble" keyboard are sure to impress. Performance-wise, the 66-Wh battery is not only big, but turned in more than nine hours of battery life. If you're willing to pay a slight premium over top-notch netbooks like the Toshiba mini NB205 and the ASUS EeePC 1000HE, the N310-13GB won't disappoint. The Samsung Go N310-13GB has a well-thought-out design and a big battery, but its price needs to come down a bit more.
Single Review, online available, Long, Date: 08/26/2009
Rating: Total score: 80%
80% Samsung N310
Source: IT Reviews

Archive.org version
The netbook market continues to grow and be the driving force behind PC sales. Samsung already has a range of mini-notebooks, and the N310 extends this with a 10.1-inch screen model, built around an Intel Atom processor. Overall, this is a good take on the near-standard netbook specification for mid-2009. It's a touch more stylish than some business models, but you pay up to £50 extra when going for the Samsung option. Performance is as good as most of the rest, but battery life isn't as impressive as we'd have liked.
Single Review, online available, Short, Date: 08/04/2009
Rating: Total score: 80% performance: 70% mobility: 50%
60% Samsung N310 review
Source: Tech Advisor

Archive.org version
It's kind of hard not to start with the Samsung N310's case. The Samsung N310 - also known as the Samsung Go - is a little weighty for a netbook, but you don't notice that when you see the curved corners, which almost make it seem slimmer than what its measurements (262x184.5x29.8mm) indicate. (It is still a little bigger than the Asus Eee PC 1005HA, though.) The Samsung N310 has some nice touches, and its striking design will be popular with some. We liked it. But at heart the Samsung N310 is an average netbook, with a higher than average price.
Single Review, online available, Medium, Date: 07/31/2009
Rating: Total score: 60%
60% Samsung N310 netbook
Source: Reg Hardware

Archive.org version
Samsung has never been a supplier of cheap and cheerful netbooks, and the consumer-oriented N310, which expands the range beyond the more seriously styled NC10, NC20 and N120, still comes in with a suggested price of a pound under £400. For that, you’d expect something very special. The N310 is a machine you buy for its looks. The keyboard’s above average, the touchpad’s fine and the screen is bright and sharp. Its student-friendly design, while nice, just doesn't compensate for the chunky feel, undistinguished spec, poor battery life and ridiculous 'premium' price.
Single Review, online available, Long, Date: 07/09/2009
Rating: Total score: 60%
70% Samsung N310 review
Source: CNet

Archive.org version
Samsung has produced some of our favourite netbooks, including the NC10, which offers great battery life, and the N110, which boasts a top-notch keyboard and trackpad. The prices of the company's netbooks, however, have been steadily creeping upwards with each new launch, and the N310 continues the trend, clocking in at around £380. Samsung is obviously hoping this netbook's unique design will convince people that it's worth the extra outlay. The Samsung N310 is a great-looking netbook, but, given the high price, we're disappointed that the battery life is so anaemic and that the specification is so run-of-the-mill.
70
Single Review, online available, Medium, Date: 06/22/2009
Rating: Total score: 70%
80% Samsung N310
Source: vnunet.com

Archive.org version
We were very impressed with Samsung’s recent NC10, and the N310 is an updated version of that computer, with improvements made to the battery life and a redesigned case. The long battery life is one point in the Samsung N310’s favour, but if you need working hours that long it may be worth seeking out a cheaper mini-notebook and buying a second, larger battery. An impressive computer with good battery life, but cheaper models work just as well.
80
Single Review, online available, Short, Date: 06/17/2009
Rating: Total score: 80%
60% Samsung N310 - 10.2in Netbook Review
Source: Trusted Reviews

Archive.org version
Once upon a time Samsung had just one netbook, the NC10. And it was good. In fact, it was the best. Now, however, clearly drunk on its success, Samsung has three different models. First there was the N110: a relatively minor NC10 refresh. This was followed by the N120: a larger system with an 'improved' keyboard and a largely superfluous 2.1 speaker system. Now, we have the N310: a funky soap bar-like effort that, aside from its design and price, is just like any other netbook. While the unusual design of the N310 will win it friends, in most other respects it's a decidedly average netbook with a relatively high price. If you fall in the love the look and don't mind spending a few extra pennies then it's still a nice machine, but there are plenty of cheaper or better alternatives.
60, Preis 60, Leistung 60, Ausstattung 60
Single Review, online available, Long, Date: 06/11/2009
Rating: Total score: 60% price: 60% performance: 60% features: 60%
70% Samsung N310 review
Source: Techradar

Archive.org version
Samsung has followed up its successful NC10 netbook with the N310 (£399 inc. VAT). Introducing an all new look, the machine provides good portability and a new pebble design keyboard. While the N310 is a great netbook boasting good usability and performance, it comes at a cost. There may not be many better looking netbooks available, but there are plenty which offer similar performance at a cheaper price.
70
Single Review, online available, Medium, Date: 06/09/2009
Rating: Total score: 70%
65% Samsung N310 netbook
Source: Hexus

Archive.org version
We're left with mixed feelings after completing an evaluation of the Samsung N310 netbook. It shares many of the traits that made the NC10 such a well-received model late last year, including excellent keyboard, decent build quality, and better-than-average battery life. Adding to the NC10, the style is sharper and it's difficult to pick faults with the way Samsung has leveraged the underlying technology. the Samsung N310 is a quality netbook that ticks all the right checkboxes apart from price. It competes against similar-specification models but £100 dearer, and however nice it looks, it's simply not worth that right now. It becomes a winner when the etail price drops to £325.
65
Single Review, online available, Long, Date: 06/05/2009
Rating: Total score: 65%
70% Samsung N310
Source: Laptop Mag

Archive.org version
This netbook is attractive and comfortable to use, but its battery life is a bit short for the price. With the N310, Samsung has created one of the more attractive and compact 10-inch netbooks on the market. Its compact build and peppy performance will provide the fashion-conscious a well-rounded package. However, its $479 price gives us pause. For $10 less you can snatch up the Editor’s Choice-winning Samsung N110, which provides double the battery life, though in a less appealing chassis. And for $70 more you can pick up the Samsung NC20, which provides a larger 12-inch display in addition to more endurance. But if style is at the top of your mobile computing list, the Samsung N310 is worth a look.
Single Review, online available, Long, Date: 05/13/2009
Rating: Total score: 70%

69.06%: This rating is bad. Most notebooks are better rated. This is not a recommendation for purchase.