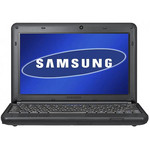 Reviews for the Samsung N135-JA01NL