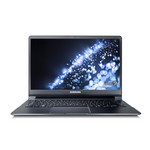 In recent weeks, we've been receiving an uptick in emails from readers, asking for help in choosing an Ultrabook (not the most affordable Ultrabook, but the best -- our fans do tend to be spec-obsessed, after all). While we can't outright make a decision for you kind folks, we've taken to suggesting a very small handful, and the 13-inch Series 9 always makes that list.
Single Review, online available, Long, Date: 07/06/2012

Samsung's Series 9 is a stunning laptop that's superbly built, has an excellent screen and which feels good to use. It's the thinnest notebook on the market and among the lightest. Even so, it runs an Intel Ivy Bridge CPU that supplies more than decent performance for office applications and more.
Single Review, online available, Medium, Date: 07/02/2012
Rating: Total score: 90%
90% Samsung Series 9 (NP900X3C-A01AU) review: A superb 13.3in Ultrabook with excellent build quality and a stunning display
Source: Good Gear Guide

If you're in the market for a thin and light laptop, then you should make it your duty to check out the Series 9 (NP900X3C-A01AU) — once you hold it in your hands, you'll fall in love with it. It can be purchased for under $1500 from some places (such as JB Hi-Fi) and you get a very well constructed and beautiful laptop for your money.
Single Review, online available, Long, Date: 07/01/2012
Rating: Total score: 90%