Modern games should be playable with these graphics cards at low settings and resolutions. Casual gamers may be happy with these cards.NVIDIA GeForce 9800M GTS:

Based on the desktop 9600 GT (G94 core), the 9800M GTS is produced in 65 nm and 55 nm on the 512 MB and 1024 MB models, respectively. The performance of the GTS is comparable to the GT version due to the higher clock speed. The PureVideo HD engine allows the GPU to decode HD videos.

Based on the G92 core, but only with 96 shaders. The performance should be similar to the 8800M GTX. PureVideo HD supports decoding of HD Videos.

» Further information can be found in our Comparison of Mobile Graphics Cards and the corresponding Benchmark List. Intel Core 2 Duo: This is the Core Duo and Core Solo successor with a longer pipeline and 5-20% more speed without more power consumption. As an addition to the Core Duo design there exists a fourth decoder, an amplified SSE-unit and an additional arithmetical logical unit (ALU).
The Core 2 Duo for laptops is identical to the desktop Core 2 Duo processors but the notebook-processors work with lower voltages (0.95 to 1188 Volt) and a lower Frontside bus clock (1066 vs 667 MHz). The performance of equally clocked notebooks is 20-25% lower than Desktop PCs because of the lower Frontside bus clock and the slower hard disks. T9400:
The T9400 is a fast middle class dual core CPU for laptops and basically a Core 2 Duo P9500 with a higher TDP of 35 Watt.
Intel Core 2 Quad: Mobile version of the desktop Quad Core processor. Due to low clock rates it is not recommended for most applications.Q9000:

Slow clocked quad core CPU (4 cores) that suffers especially in many games from the low clock speed. Therefore, not suited for games and only for highly multi threaded applications.

85%: This rating should be considered to be average. This is because the proportion of notebooks which have a higher rating is approximately equal to the proportion which have a lower rating.» Further information can be found in our Notebook Purchase Guide. 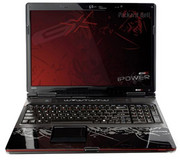