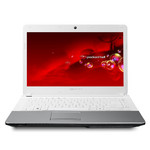 While unable to compete on sheer performance and storage, the NS44-HR- 033UK is a cheaper and smaller alternative to some other laptops. You'll either love or hate the styling, but decent usability and a great battery life make this laptop worthy of consideration.
Single Review, online available, Very Short, Date: 06/30/2011
Rating: Total score: 70%