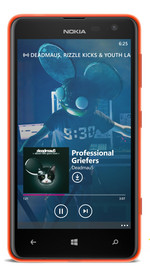 Reviews for the Nokia Lumia 625

82% Review Nokia Lumia 625 Smartphone | Notebookcheck
The new mid-range. No matter if entry-level or high-end smartphone - Nokia always has the right model in its Lumia series. The newest member of the family is the Lumia 625. Online retailers already sell the mid-range model for the competitive price of 250 Euros (~$334).
30% Nokia Lumia 625 Review
Source: Think Digit

It's hard to recommend the Lumia 625 especially since you have a great device such as the Lumia 720 available at a cheaper price. If you want to purchase a device under 20k running the Windows Phone OS, the Lumia 720 is a better package deal. If a large screen device is what you want, you have smartphones such as the Canvas Doodle 2, Xolo Q1000S and more at your disposal. Pick up the Lumia 625 if you're specifically looking for a large-screened WP smartphone.
Single Review, online available, Medium, Date: 10/11/2013
Rating: Total score: 30% price: 40% performance: 50% features: 60% workmanship: 70%
80% Nokia Lumia 625 review: 4G smartphone on a budget
Source: Tech Advisor

The Nokia Lumia 625 is a big, bright and colourful Windows Phone 8 handset. If you're looking for a 4G capable smartphone on a budget then this is a great buy. It has good build and performance but has limited internal storage and a mediocre camera.
Single Review, online available, Short, Date: 10/01/2013
Rating: Total score: 80% price: 90% performance: 80% features: 60% workmanship: 80%
Nokia Lumia 625: Quality budget 4G phone ... but where's UK's budget 4G?
Source: Reg Hardware

There's plenty to like about the Lumia 625; another budget Nokia without the budget compromises that make Landfill Android™ cheapies such a rotten experience. But until the networks step up and offer 4G on a budget, it's going to be in that curious spot. But right now, the consumer proposition is this: if you want 4G, you have to pay a premium, and if you're paying a premium, you want a bit of diamond on your ring.
Single Review, online available, Short, Date: 09/19/2013

While the MRP of the Lumia 625 is Rs 19, 999, you can find it online at varying price points depending on the colour you pick. We feel this is an expensive price for the phone especially since all you're getting is a larger screen, without any increase in resolution and important features which have been sacrificed. We would recommend the Lumia 720 over the 625 any day for its better display, NFC, better front and rear camera - all of this in a lighter and much more compact body. There's even support for wireless charging for those who want to get the most out of their Lumia device.
Single Review, online available, Short, Date: 09/10/2013
Rating: Total score: 60%
Nokia Lumia 625 review
Source: Engadget

So, does Nokia need another budget Lumia? Well, yes. We get what the company was trying to achieve with the Lumia 625: 4G on a shoestring. In that respect, mission accomplished. We can't help but feel, though, that Nokia hasn't quite nailed the niche that it set out to, leaving space for a similar budget offering that's LTE-capable, and better executed.
Single Review, online available, Long, Date: 09/09/2013

It’s easy to be impressed with the Nokia Lumia 625 thanks to its colourful, replaceable shells, stellar performance and great build quality. The qualms with Windows Phone 8 are still lingering, though this could easily be sorted with a few high profile app release. We can even forgive the middling, low-res screen just because the device is priced at the low-end of the market. If you’re looking for a cheap, smooth running first smartphone, you can’t go wrong this latest addition to the Lumia line.
Single Review, online available, Very Short, Date: 08/29/2013
Rating: Total score: 80%
60% Nokia Lumia 625 review
Source: V3.co.uk

Considering the 625's super affordable price, it is quite a decent phone, and buyers on a budget are unlikely to find a better deal anytime soon. This, combined with the fact that Nokia only recently released the even more affordable 520 and mid-tier 720 means we can't really see the 625 enticing too many new users to the Windows Phone ecosystem. Still for those on a shoestring budget looking for a big screen 4G smartphone, it remains a solid option.
Single Review, online available, Long, Date: 08/26/2013
Rating: Total score: 60%

Despite 4.7-inch display, the Nokia Lumia 625 is one of the slimmest Lumia smartphones. The devices appears quite complete and like it cannot be beaten. The back is covered in a non-slip polycarbonate providing a secure grip for its users. On the front, it is covered Corning Gorilla Glass 2. The back cover comes in five different interchangeable colors and once removed, there is a 200mAh non-removable battery, a micro-Sim and a microSD port which comes in handy due to its tiny built-in memory. Windows 8 is pre-installed on the 8 GB internal memory. So only 4.7GB are available to the user. There are three capacitive buttons on the front, the usual Back, Home and Bing buttons found on all Windows Phone devices. On the side, there are a volume rocker, power button, and a camera button.

The Lumia 625 features all basic functions such as Bluetooth 4.0, WLAN 802.11b/g/n receiver, and a GPS receiver. Despite being a low-priced device, the Lumia 625 comes with LTE capabilities commonly found in high-end devices these days. The 4.7-inch display has a resolution of 480x800 pixels, which is good enough for this price tag. This particular Lumia device features the older Qualcomm Snapdragon S4 MSM8930, a 1.2 Ghz dual-core SoC. This processor caters well above the needs of a regular user. So, performance is good and the Lumia 625 is brilliant at multitasking. On the downside is the 5 megapixels rear camera, which is far from what you would get from a proper smartphone. Apart from that, the supply of apps in the Windows Store is also a major issue that cripples not only the Lumia 625, but all Windows phones. From a value for money perspective, the Lumia 625 still sits far above all its Android counterparts.

S4 Plus MSM8930: High-end dual-core Krait based SoC that includes a Adreno 305 GPU.» Further information can be found in our Comparison of Mobile Processsors.

Nokia: The Finnish enterprise is one of the most important telecommunication companies and well-known for mobile technologies. The company started with netbooks in 2009.

72.4%: This rating is bad. Most notebooks are better rated. This is not a recommendation for purchase.