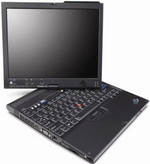 Reviews for the Lenovo ThinkPad X61

It seems entirely appropriate that there's a comprehensive guide to the Lenovo range of ThinkPad laptops on Wikipedia, because the list is simply enormous and we mere mortals need all the help we can get to navigate ourselves to laptop bliss. IBM built up the ThinkPad brand by offering businesses a huge range of choice so they could have the exact list of features that they wanted and Lenovo, the new owner of ThinkPad, has very sensibly followed this business model.
As a laptop the X61 has relatively low performance and costs a small fortune, especially considering the lack of optical drive. But the build quality and engineering are second to none and this shines through with the Tablet features which have been executed with something close to genius. And did we mention that it's very expensive?
Preis/Leistung sehr schlecht, Leistung schlecht, Verarbeitung gut
Single Review, online available, Medium, Date: 11/15/2007
Rating: price: 30% performance: 40% workmanship: 80%
Sony VAIO NR Review
Source: Notebookreview.com

The Lenovo ThinkPad X61 12.1” ultraportable notebook was released by Lenovo this year as a replacement for the X60.  The X61 provides a nice chipset, processor, and graphics refresh to the X60 with the adoption of Intel’s GM965 Express chipset which features the X3100 integrated graphics adapter.  In addition, optional features such as integrated Wireless WAN connectivity, turbo memory, and fingerprint security enhance the X61’s functionality. There are a few models in the X61 family, and this review covers the plain vanilla X61 12.1” notebook model.  The X61 family also features a tablet pc convertible notebook and an “ultimate battery life” X61s ThinkPad. Battery life with the 4 cell battery has not been great with real world tests being between 1 hour 40 minutes and 2 hours 22 minutes depending on the power setting; the X61’s power manager is great at selecting which profile to use to lengthen battery life.
Leistung gut, Verarbeitung gut, Display mangelhaft, Mobilität schlecht
User Review, online available, Long, Date: 11/12/2007
Rating: performance: 80% display: 50% mobility: 40% workmanship: 80%
90, Leistung sehr gut, Mobilität zufriedenstellend% Lenovo ThinkPad X61 Tablet
Source: PC Mag

These days, convertible tablet PCs are showing up as more than just a blip on the radar. They've been widely adopted in the vertical markets, and students are embracing them. Lenovo (formerly IBM) has long been a leader in the convertible tablet PC space. In the ThinkPad X61 Tablet ($1,934 direct) Lenovo continues to fuse the design of its darling X-Series ultraportable (see ThinkPad X60s) with the tablet's functionality. With the best keyboard in the industry, very good performance scores, and a sturdy design, the X61 Tablet earns an Editors' Choice award to set beside Lenovo's previous one in this space, the ThinkPad X41 Tablet. While it's clear that convertible tablets are picking up traction, the penetration hasn't been at the level of some of the more popular laptops. It could be that consumers haven't yet grasped the idea of using a digitizer pen on a laptop. Maybe the price premium is putting off potential customers.
4.5 von 5
Single Review, online available, Medium, Date: 10/12/2007
Rating: Total score: 90, Leistung sehr gut, Mobilität zufriedenstellend% price: 90% features: 90% mobility: 70%
80% Review: Lenovo Thinkpad X61 notebook computer
Source: vnunet.com

Today's notebook PCs tend to fall into two categories; those you can carry around with you, and those likely to give you a hernia. Lenovo's Thinkpad X61 sits firmly in the former camp. Weighing just 1.63kg, this ultraportable is the perfect travelling companion. Interestingly, this model is the first we've seen without the old IBM badge. While it isn't built like a tank, the X61 is undeniably well made. The back of the 12.1in screen seems a little flimsy but, on the whole, the magnesium alloy chassis is certainly up to the rigours of day-to-day travel. The keyboard also has a good, solid feel to it, but when typing at speed we kept catching our fingers on Lenovo's pointer control. This is an acquired taste and anyone used to a touchpad will surely end up plugging a mouse into one of the system's three USB ports after more than 10 minutes.
(von 5): 4, Preis/Leistung 4, Leistung 4, Ausstattung 4, Mobilität sehr gut
Single Review, online available, Short, Date: 09/21/2007
Rating: Total score: 80% price: 80% performance: 80% features: 80% mobility: 90%
90% Lenovo ThinkPad X61 ultraportable laptop PC
Source: Tech Advisor

Lenovo supplies its X series ThinkPad as a regular laptop and also as a reversible Tablet in both X60 and X61 variants, so that's four basic models, but there are so many options and variants that it's almost impossible to list them in a tidy way - but we'll give it our best shot. Every X61 uses the Intel 965G Express chipset with ICH8-M and you then choose your processor speed. Our review sample uses the 1.6GHz Core 2 Duo L7500 processor, or you can go for the 1.4GHz L7300. It runs Windows Vista Business without the Aero interface, but you can also choose from Vista Ultimate, Vista Home Premium, and XP Tablet Edition. You'll recall that Vista includes Tablet and Media Centre features. We got a 12.1in MultiView screen with 1,024 x 768 resolution, rather than the brighter 12.1in Super-Wide Angle screen with the same resolution, or a widescreen 12.1in screen that displays 1,400 x 1,050 pixels.
75 von 100
Single Review, online available, Long, Date: 08/09/2007
Rating: Total score: 75%
86% Lenovo ThinkPad X61
Source: PC World

The Lenovo ThinkPad X61 is an ultraportable business laptop geared to individuals who demand the best. Like its larger brothers of the ThinkPad line, it shares all of the same rugged features, as well as the creature comforts of a full-size keyboard. The X61 looks as if Lenovo took a ThinkPad T60 and shrunk it down by 30 percent. Although it is much smaller than its counterparts, it is every bit as fast. This model came loaded with a 7200rpm hard drive, 2GHz Core 2 Duo processor, and 2GB of RAM. Light business travelers can rest easy knowing they didn’t sacrifice anything but weight when they bring the X61 on the road.
I found the ThinkPad X61 to be a fantastic alternative to my larger 15” T60 in situations that I didn’t want to lug around the heavier machine. It had all the grunt of the much larger machine, but inside a much smaller package. I was also surprised by how easy it was to upgrade the ram in the X61, by removing a access panel on the bottom of the laptop.
Leistung sehr gut, Display schlecht, Mobilität gut, Emissionen mangelhaft
Single Review, online available, Long, Date: 06/20/2007
Rating: performance: 90% display: 40% mobility: 80% emissions: 50%

L7500: » Further information can be found in our Comparison of Mobile Processsors.