Reviews for the Lenovo ThinkPad L580-20LW000VMH

Series: The Lenovo ThinkPad L580 is a mid-range business laptop that claims to be ready for everything. The 15.6-inch ThinkPad L580 has the versatility, power, and portability to keep up and to make the job easier. It falls in between the high-end T series and business-focused E-series devices. The L580 will take on full workload, thanks to the Intel Core processors with optional Intel vPro technology for advanced security and manageability, optional AMD Radeon discrete graphics, a choice of the fast file access of SSD storage or the high capacity of HDD storage, and great memory capacity. Its 2x2 AC WiFi, LTE-A, and full array of ports will keep users connected to the internet and a variety of external devices. The Lenovo ThinkPad L580 is built from PC and ABS plastic, unlike some other more premium laptops which choose metal or carbon fibre. However, at 15 % lighter and 19 % thinner than the previous model, the L580 is easy to take home at the end of the day. Its optional backlit keyboard with white LEDs allows use in low-light surroundings and complete even the most urgent of tasks despite late hours. The anti glare IPS FHD display is also easy on the eyes. A 15-inch display is great, especially if users are always on the road or traveling without monitors. With up to 11 hours of life in its battery, users can get a lot of uninterrupted time without worrying about electrical outlets. Even if it needs to plug in, its RapidCharge feature will give 80 % battery capacity in an hour.

Extensive I/O ports such as USB Type-C, USB 3.0, and HDMI make it easy to plug in most peripheral devices, while Near Field Communication (NFC) technology gives the luxury of wireless communication between laptop and other nearby NFC devices. Dual Band AC (2x2) and Bluetooth 4.2 make wireless online connectivity a snap, but even if users are not near a router, integrated global mobile broadband LTE-A will keep them connected. Users can simply touch the fingerprint scanner to access the L580, or use face with Windows Hello facial recognition software to log in automatically. What’s more, the fingerprint reader thwarts biometric hacking with anti-spoofing technology. That means the fingerprint image is saved inside the chip. User data is protected too, with the discrete Trusted Platform Module (dTPM), which encrypts information. Lastly, Fast Identity Online (FIDO) enables hardened authentication that wraps access info in three layers of security. FIDO authentication pertains to online credentials, when they sign in to websites like Facebook or Google, or make payments via PayPal, Visa, etc. As a conclusion, Lenovo has put together a business laptop that is mid-range at an affordable price tag for its hardware specifications. It has great display, security features and performance, just slightly lacking on build and design.

i5-8250U: Kaby-Lake-Refresh based low power quad-core processor. The four cores are clocked between 1.6 and 3.4 GHz (Turbo Boost) and support HyperThreading. The integrated GPU is clocked between 300 and 1,100 MHz. The SoC is manufactured in a 14nm+ FinFET process. » Further information can be found in our Comparison of Mobile Processsors. 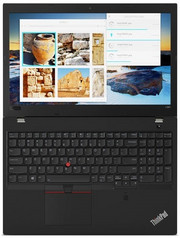 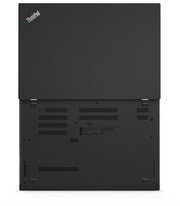 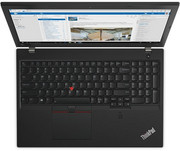