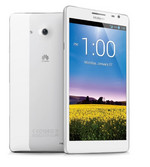 Reviews for the Huawei Ascend Mate

For the money, the Ascend Mate is not at all a bad device. The screen is good, the price is right – Vodafone is offering it for £25 a month with nothing down, and you can pick unlocked examples up for under £340 – battery life excellent and there are some interesting VLP software optimisations like the two-thirds keyboard. And while made predominantly of plastic, it still manages to look and feel rather more upmarket than the Samsung Galaxy Mega 6.3. Performance isn’t bad either, though I don’t see Huawei’s K3V2 chipset keeping the folk at Nvidia or Qualcomm awake at night. Shame about that Google+ bug though.
Single Review, online available, Medium, Date: 08/29/2013
60% Huawei Ascend Mate review
Source: V3.co.uk

However, we can't help but think that those after a large-screened smartphone have better choices on the market, like the Asus Fonepad, for example. While we were impressed with the screen and battery life, Huawei's overbearing UI is unlikely to win over many users, who might become frustrated by the handset's lacklustre performance, despite its high-end quad-core processor.
Single Review, online available, Medium, Date: 08/20/2013
Rating: Total score: 60%
70% Huawei Ascend Mate Review
Source: Think Digit

For Rs. 24,900 you get some pretty good specifications under the hood of the Ascend Mate and a really large display. For the same price you get some really great performing devices such as the Nexus 4, Samsung Galaxy S3 and more. What the Ascend Mate brings to the table is a really large display that's good for running multimedia content and playing games but considering the size of the device we wish the resolution were higher than 720p. The camera on the phone is lacklustre. You can consider picking up the Mate if a large display is mandatory for you, and you don't mind using a new UI. It's a better option than the Galaxy Mega 5.8 as well, if you are looking for performance and not familiarity.
Single Review, online available, Medium, Date: 07/25/2013
Rating: Total score: 70% price: 70% performance: 70% features: 60% workmanship: 60%
A supersized phone with supreme battery life
Source: Engadget

At times, the Ascend Mate comes across as a two-sided smartphone. There's the would-be flagship, with a big screen and even bigger battery life. If you value those two factors above others, you may have found an ideal mobile companion: the Mate outperforms the Galaxy Note II and Optimus G Pro on both those fronts, and it may outlast the Galaxy Mega 6.3 on battery tests, too.
Single Review, online available, Long, Date: 05/23/2013

k3v2 Hi3620: » Further information can be found in our Comparison of Mobile Processsors. 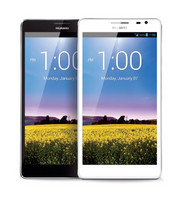