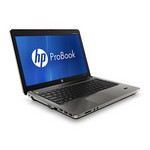 Reviews for the HP ProBook 4431s

AMD Radeon HD 6490M: Entry to middle class graphics card based on the Seymore XT codename with support for fast GDDR5. The chip can be clocked at 700-750 with GDDR5 and 800 with slow DDR3.