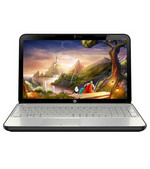 Reviews for the HP Pavilion g6-2269ca

AMD Radeon HD 7520G: Processor graphics card that is built into the Trinity A6 series APUs from AMD (e.g. A6-4400M). Based on the VLIW4 architecture of the Radeon HD 6900 desktop series.

A6-4400M: Dual-Core APU of the Trinity line with an integrated Radeon HD 7520G graphics card.» Further information can be found in our Comparison of Mobile Processsors.