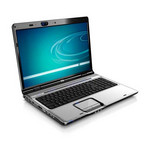 Reviews for the HP Pavilion dv9655ea

Archive.org version
If you’re on a budget and looking for a media centre for watching and recording media, the HP Pavilion dv9655ea is a great compromise. The screen is god, the storage excellent and the right features all in place.
However, if you’re looking to edit video and generally run high-end tasks, you’ll find it frustrating as we simply didn’t find it powerful enough. With a TV tuner, remote control and big screen this is a great media centre machine but we found it could run slow at times.
7 von 10, Preis/Leistung sehr gut, Leistung schlecht
Single Review, online available, Short, Date: 01/07/2008
Rating: Total score: 70% price: 90% performance: 40%