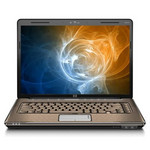 Reviews for the HP Pavilion dv5-1250us

The latest version of HP's Pavilion dv5 series moves away from the Intel based processors to the more affordable AMD Turion X2 processors. This does decrease the performance somewhat compared to man other 15.4-inch laptops, but the lower $850 price rage will attract many. The bronze color scheme may attract some and detract others but they really should have reconsidered the keyboard to be easier to see.
Single Review, online available, Short, Date: 05/18/2009
Rating: Total score: 60%