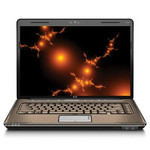 Reviews for the HP Pavilion dv5-1140us