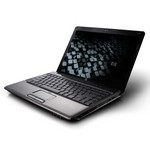 Reviews for the HP Pavilion dv4-1125nr

Archive.org version
If you can find a more feature-packed laptop for $800 on store shelves, I'd like to see it. The HP Pavilion dv4-1125nr separates itself from its retail competition by including 64-bit Vista and 4GB of memory while also serving up multimedia-friendly features such as an HDMI port, dual headphone jacks, and a remote control. If you can get past its poor battery life, you'll find a lot to like about the 14-inch, feature-packed HP Pavilion dv4-1125nr.
(von 10): 8, Ausstattung 9, Leistung 8, Mobilität 4
Single Review, online available, Medium, Date: 10/29/2008
Rating: Total score: 80% performance: 80% features: 90% mobility: 40%

79.5%: This rating is not convincing. The laptop is evaluated below average, this is not really a recommendation for purchase.