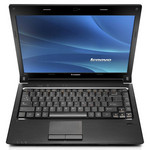 Reviews for the Lenovo B460

The Core i3-350M is technically a Core i5-430M without the Turbo Boost overlocking feature. Therefore, it always clocks with max. 2.26 GHz (of course Speedstep is included). Thanks to Hyperthreading, 4 threads can be processed simultaneously. An integrated graphics card (GMA HD) and a DDR3 memory controller are also included in the package.