Reviews for the HP Pavilion G60-438nr

Oct 8 2009 - HP's G60-438nr is a special retail version of their G60 laptop that features a very low $500 price tag. What they have done is modify a few of the components put into the system to try and reduce the costs. This gives it a little less space and not as robust wireless networking compared to previous models. Still, if you don't require these features and want a laptop with a larger screen, the G60-438nr works just fine as a general purpose laptop.
Single Review, online available, Medium, Date: 10/08/2009
Rating: Total score: 60% 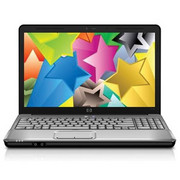