The HP Envy 14-1196ea laptop sports the Beats by Dr Dre colours and packs some potentially powerful components. Sadly, we didn't find the sort of performance we were hoping for. If you want an angry-looking laptop that's straight outta Compton, the Dr Dre-inspired HP Envy 14-1196ea is your tool, but it lacks firepower for the price.
Single Review, online available, Long, Date: 10/31/2011
Rating: Total score: 60% 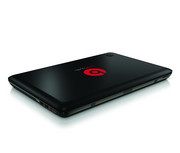