If you can live with the awkward quirks of its touchpad, there is no denying the style, power and features of the Envy 14. Unfortunately, we found usability too flawed to want to use this as our main machine, however, reducing the impact of what is an otherwise fantastic multimedia laptop
Single Review, online available, Very Short, Date: 02/05/2011

Not many have been brave enough to go for Apple head-on, and while the result isn't as compelling the MacBook Air this still makes a great laptop with a host of interesting features.
Single Review, online available, Very Short, Date: 01/26/2011
Rating: Total score: 80% 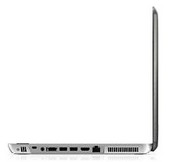