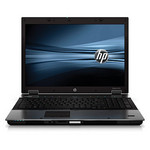 Of course, the Nvidia Quadro 5000M—a high-end Fermi GPU with 320 CUDA cores and a memory bandwidth of 76.8GB/s—does much more than just play games. To test the 8740w’s capabilities as a graphics workstation, we ran the SpecViewperf11 OpenGL-based workstation benchmark on the notebook. While the 8740w made an impressive showing on SpecViewperf11’s individual tests, its overall performance didn’t quite measure up to what you could expect from even a relatively less-expensive desktop workstation.
Single Review, online available, Very Short, Date: 01/28/2011
Rating: Total score: 80%

920XM: Fastest Core i7 laptop CPU in 2009 but with a TDP of 55 Watt it is pretty power hungry. Due to the Turbo Mode, the CPU can run with up to 3.2 GHz. Because of the Extreme tag, the multiplier is not locked, and therefore the CPU is easy to overclock.» Further information can be found in our Comparison of Mobile Processsors.