Reviews for the Gateway LT3103u

Lately, as soon as Acer launched a new netbook, Gateway wasn't far behind with something similar. Case in point: The Gateway LT3103u ($380 street) looks eerily similar to the Acer Aspire One (A0751h) in that both have unusually large widescreens and keyboards. In fact, they are practically identical until you take a peek at under the hood: AMD parts, too, are unusual finds in a netbook. With them, the LT3103u is slightly faster than the Atom-based A0751h, albeit at the expense of battery life. The Gateway LT3103u goes against everything that coined the term netbook, but you'll like the price, 11-inch screen, and the full size keyboard.
Single Review, online available, Medium, Date: 09/04/2009
Rating: Total score: 70%
72% Gateway LT3103u
Source: CNet

In the battle for Netbook market share supremacy, Intel's Atom CPU stands nearly unchallenged, despite a handful of offerings with AMD and Via CPUs. So it's surprising we found so much to like about the 11.6-inch Gateway LT3103u, which uses an AMD Athlon 64 L110 processor to provide a smoother overall experience than most Atom-powered Netbooks, while keeping the price in the typical Netbook ballpark. The 11-inch, AMD-powered Gateway LT3103u does well on price and performance, but drops the ball on battery life when compared with the competition.
Single Review, online available, Long, Date: 08/27/2009
Rating: Total score: 72% performance: 80% mobility: 60%
80% Gateway LT3103u 11.6-inch Netbook Laptop PC
Source: Comp Reviews

Gateway has decided to buck the trend of the netbook market and used the AMD processor with ATI graphics that make the LT3103u a very unique system. While it still retains the netbook dimensions, the system certainly provides a higher level of performance especially in the graphics department. There are downsides to this though. Most notable is the system, even with a six cell battery, has a much lower battery life than competing systems based on the Atom processors.
Single Review, online available, Short, Date: 08/22/2009
Rating: Total score: 80%
60% Gateway LT3103u
Source: Laptop Mag

The Gateway LT Series represents netbooks’ first awkward steps into adolescence. With an 11.6-inch display, it’s almost as big as a traditional notebook, but while its AMD CPU is more powerful than Intel Atom chips, it still has a way to go before it can compete with ULV processors. But for now, the increase in power is not enough to overcome its lack of endurance when compared to the Acer Aspire One 751h, which is $50 less expensive, or the ASUS Eee PC 1101HA, which costs $30 more. Still, the LT3013u’s design and $399 price tag makes it attractive for those looking for a larger netbook with more grown-up specs.

On paper, many netbooks are indistinguishable from one another. Most adhere stoically to an unbending regimen of specs: an Atom-based processor, 1GB of RAM, 160GB of storage, a 10.1-inch screen, a three-cell battery, and a price that hovers around $500. But Gateway, with one of its two initial series of netbooks, has created a netbook design that’s anything but ho-hum. An Athlon CPU and aggressive pricing raise Gateway's first netbook from “standard” to “standout.”
Single Review, online available, Long, Date: 08/01/2009
Rating: Total score: 93%

ATI Radeon Xpress X1270: Built in RS690T chipset and is based on an X700 graphics core (with less pipelines). It features no dedicated graphics memory but Vista Aero support.

L110: Slow clocked single core processor with a similar performance as 1.6 GHz Intel Atom CPUs but a higher power consumption.» Further information can be found in our Comparison of Mobile Processsors.

Gateway: Gateway, Incorporated. is a computer hardware company based in California which develops, manufactures, supports, and markets a wide range of personal computers, computer monitors, servers, and computer accessories. AOL acquired Gateway.net, the online component of Gateway  Inc., in 1999. 2007, Acer completed its acquisition of Gateway for approximately US$710 million. The market share outside of the US market is rather low.

In 2014 to 2016, Gateway did no longer belong to the Top 10 laptop manufacturers/distributors. Newer devices from Gateway are hardly reviewed by specialist media any longer (as of 2016). 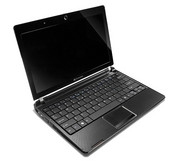