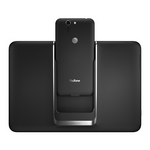 Reviews for the Asus PadFone X

This summer, AsusTek Computer Inc. claims you don't need both a phone and a tablet - as long as you get its new PadFone X. The PadFone works like any other phone and has a screen that measures 5 inches diagonally. When you want a tablet experience, you simply slip the phone into a slot on the back of the tablet display, which is included. All the apps on the phone now work on the 9-inch tablet. The phone is what runs the tablet. Asus is bringing this concept to the U.S. for the first time.
Single Review, online available, Very Short, Date: 07/29/2014

Asus PadFone X review: Like no other
Source: GSM Arena

After spending enough time pondering over the good and the bad about the Asus PadFone X, we realized that the hybrid device could well be the ultimate Android offering for user seeking the most value for their money. The gadget does everything a flagship device is expected to do, but with the added benefit of full-sized tablet functionality. It deserves a spot on the shopping list of anyone who wants top-notch hardware in a phone and tablet, but can't stretch his/her budget for two standalone devices.
Single Review, online available, Long, Date: 07/21/2014

If I've seemed unduly harsh on the Padfone X, it's because I still think there's a place in the world for a hybrid like this. Sadly, despite years of tinkering with the same formula, ASUS couldn't completely stick the landing this time around. For all the gripes I've leveled at this thing, though, I've had to mentally repeat one sentence like a mantra throughout my weeks of testing: all of this is just $200 with a contract.
Single Review, online available, Long, Date: 06/19/2014
Rating: Total score: 72%
Asus PadFone X: A Smartphone-Tablet Hybrid Better in Concept Than Execution
Source: Recode

Like a lot of two-in-one devices, the price of convenience comes with sacrifices. Asus PadFone X isn’t an exceptional smartphone nor is it an outstanding tablet. But if you want both and don’t have a lot of cash to spend, it’s certainly worth consideration.
Single Review, online available, Very Short, Date: 06/05/2014

The PadFone X is an intriguing device that packs a smartphone and tablet into a single, affordable package. On their own, the two devices are good, but not great. The handset's battery life is relatively short, while the slate is on the heavy side with a distractingly large bezel. Together, though, they make the PadFone X a fairly impressive hybrid at an aggressive price.
Single Review, online available, Long, Date: 06/05/2014
Rating: Total score: 70%
70% ASUS PadFone X review: a beginner’s flagship with a tablet in the box
Source: Pocketnow

The fact is, though, the people most likely to be attracted to the PadFone concept are also probably the type that already own a tablet. And as a smartphone alone, the PadFone X is still a great option, but not quite on the same level as the Galaxy S5 or HTC One (M8). The GS5 is faster, lasts longer, and has a better camera. The HTC One (M8) is the most beautiful phone on the market and has better overall performance as well. Either of those options are better for anyone who already owns a modern tablet, but if you're in the market for a tablet and smartphone upgrade, the PadFone X is a great deal and a solid option.
Single Review, online available, Short, Date: 05/31/2014
Rating: Total score: 80%

The differences between a phone and tablet are growing finer each day. However, Asus has taken it one step further; by creating a device that is both a phone and a tablet! The Asus PadFone X is not only great in functionality, it also costs much less than expected making this device a value purchase.

The 5 inch screen is fitted with a resolution of 1920 by 1080 pixels providing good enjoyable graphics. The device is powered by a quad core 2.3 GHz processor and 2 GB of RAM making every day usage smooth and seamless. It also comes with a native memory of 16 GB and the option of using an external SD card. The Asus PadFone X has WiFi 802.11 b/g/n as well as WEP, WPA and WPA2 encryption. It also supports Bluetooth 4.0 and so basically has wireless connectivity covered.

Sadly, the design is a little lacking. It is 172 mm thick and weighs 150 grams, making it neither sleek nor stylish. The black matte plastic finish makes it look neat, but not cool. All in all, the Asus PadFone X may very well be the next big thing; 2 devices in one! Despite its design, the Asus PadFone X makes up for it with excellent quality and performance.

73%: This rating is bad. Most notebooks are better rated. This is not a recommendation for purchase.