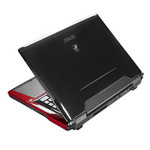 Reviews for the Asus G71G

The ultimate gaming laptop needs something more than the fastest processors and the most blistering 3D graphics cards, and ASUS is well aware of this. The ASUS G71G-Q1 ($2,000 street) is close to the bleeding edge, packing features like an Intel quad-core processor, a Blu-ray reader, and cavernous hard drives. It's almost the total package, but it falls short on the one thing that matters most to gamers: graphics. Although the Nvidia GeForce 9800M GS card it comes with is considered a very good gaming card, there are systems that deliver higher frame rates for about the same price. The ASUS G71G-Q1 makes a perfect media center or desktop replacement laptop, but if frame rates are paramount for you, there are systems that carry better graphics cards.
70, Leistung 60
Single Review, online available, Medium, Date: 03/23/2009
Rating: Total score: 70% performance: 60%

NVIDIA GeForce 9800M GS: As the 9800M GTS, the 9800M GS is based on the G94 core but features a lower clock speed. It is manufactured in 55 nm and therefore has a lower max current consumption (60W). The integrated PureVideo HD engine is able to decode HD videos.