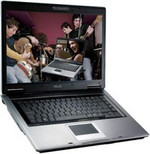 Reviews for the Asus F3TC

In 90nm produced dual core processor with a low clock rate of 1.6 GHz. The TL-52 is still based on the K8 core and compareable to a slower clocked Core Duo.