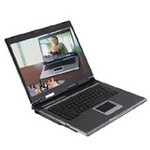 Reviews for the Asus A6JC

This is definitely a notebook I’d recommend. It has enough power to run almost every application and it has very good build quality and a nice screen. The inclusion of a built-in camera and special buttons to play music or DVDs without booting up makes it a very good buy for the multimedia user. Being considerably heavier than a 14.1” system may bother some users looking for a more portable notebook.
umfangreicher Erfahrungsbericht eines Benutzers; online abrufbar

The Asus A6JC combines business and entertainment features with impressive pep and battery life--all for a reasonable price of $1299. With a 1.66-GHz Core Duo T2300 processor and 1GB of 533-MHz DDR2 RAM, the A6JC produced a superior WorldBench 5 score of 90, edging two similarly configured notebooks--a WinBook T230 that scored 86 and a Sony VGN-FE570G that scored 82--for top performance honors in its class. The eight-cell 4800-mAH battery endured for 4.5 hours on a single charge.
ausführlicher Test mit Geräteaufbau und Testwerten und Bildern; online abrufbar

78.5%: This rating is not convincing. The laptop is evaluated below average, this is not really a recommendation for purchase.