Apple, on the other hand, sits strongly on top of most popular smartphone makers list.
Arkadiusz Piasek, 06/08/2015
Android Smartphone Apple
4

In April 2015, Apple was the biggest smarthone manufacturer, with 43.1 percent market share (a 1.8% increase since January 2015). Apple’s leading position looks quite safe at the moment, with Samsung’s market share of just 28.6%. LG sits in the 3rd position, with 8.4% of all devices on the market. 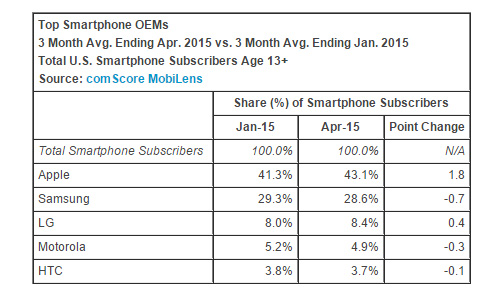 At the same time, Android held its position of most popular platform with 52.2 percent of smartphones in the USA running the Google’s operating system (1 percent less than in January this year). Apple’s iOS follows with 43.1 percent (up 1.8%). Microsoft Windows Phone can only boast a 3-percent market share and once-popular BlackBerry OS barely makes it to the list with 1.5% share. 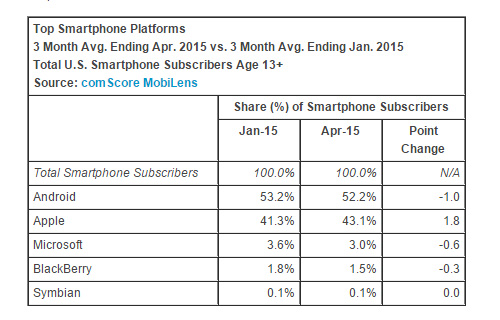 Facebook has been found to be the most popular single application on Android and iOS combined – as much as 71.1 percent of smarthone users have it installed on their device. The Facebook app is followed by YouTube (57%) and Google Search (51.8%). 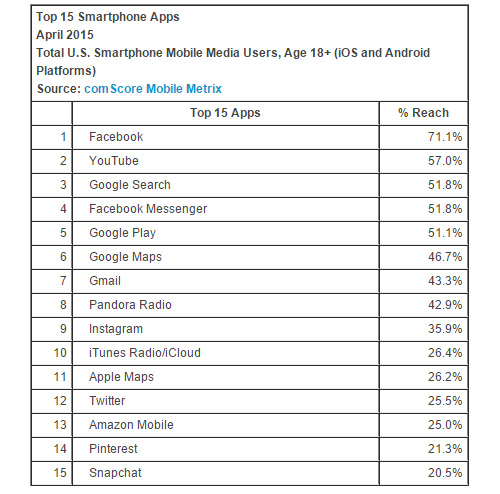 Working For Notebookcheck
Are you a techie who knows how to write? Then join our Team!
Details here
Survey
Join our Support Satisfaction Survey 2022: We want to hear about your experiences!
Participate here

RESTON, VA, June 5, 2015  – comScore, Inc. (NASDAQ: SCOR), a global leader in digital media analytics, today released data from comScore MobiLens®  and Mobile Metrix®, reporting key trends in the U.S. smartphone industry for April 2015. Data from this report is based on MobiLens Plus, an enhanced version of the MobiLens product that combines insights on smartphone and tablet ownership and features a variety of new insights on consumer mobile behaviors. To learn more about MobiLens Plus, please visit: http://www.comscore.com/Products/Audience-Analytics/MobiLens-Plus.

* Beginning with April 2015 data, MobiLens Plus includes an improved sample weighting methodology that incorporates additional controls for smartphone and tablet populations. This enhancement resulted in a step change increase in the total mobile population but had minimal impact on key market share dynamics. The 3-month average ending April 2015 was calculated by averaging April’s MobiLens Plus numbers with March and February’s numbers from the traditional MobiLens product in order to preserve the 3-month rolling trend in our public monthly reporting.

Smartphone Platform Market Share
Android ranked as the top smartphone platform in April with 52.2 percent market share, followed by Apple with 43.1 percent (up 1.8 percentage points from January), Microsoft with 3 percent, BlackBerry with 1.5 percent and Symbian with 0.1 percent.

About comScore
Founded in 1999 and headquartered in Reston, Virginia, comScore, Inc. (NASDAQ: SCOR) is a global leader in digital media analytics. comScore makes audiences and advertising more valuable by providing trusted, independent metrics that help businesses understand how people interact with content and advertising across TV and digital devices, giving a total view of the consumer. Through its products and services, comScore helps its more than 2,500 clients understand their multi-platform audiences, know if their advertising is working, and access data where they want and need it. Please visit www.comscore.com to learn more.