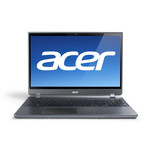 With its sleek, sturdy chassis, Core i5 power, and affordable price tag, the Acer Aspire M5-581T-6405 is a good choice for users looking to enter the Windows 8 ultrabook arena without spending a fortune. Granted, it's larger than most of its competitors, but it's still very portable and you get a bright 15.6-inch screen in return. Touch-screen technology would make this a Windows 8 ultrabook to be reckoned with, however. If you have some wiggle room in your budget, consider the Acer Aspire M5-481PT-6644, our Editors' Choice for entry level touch-screen ultrabooks. It offers ten-point touch display technology, solid performance, and a 14-inch all-metal chassis for around $130 more.
Single Review, online available, Very Short, Date: 03/18/2013
Rating: Total score: 70%