Reviews for the Viewsonic ViewBook VNB120

ViewSonic's ViewBook VNB120 is an ultra-low voltage ultraportable notebook with a 12.1in screen and a 1.2GHz Intel Celeron SU2300 dual-core CPU. The 12in ViewBook VNB120 is a much better proposition than a 10in notebook: it's bigger, faster and therefore easier to use. However, we don't like its keyboard, which could use softer keys and full-sized period and comma keys, nor its touchpad design, which blends into the palm rest. The upside down USB ports are also a bit of a pain.
Single Review, online available, Medium, Date: 04/08/2010
Rating: Total score: 60%
83% ViewSonic ViewBook VNB120
Source: Mobile Computer

ViewSonic may be a name more readily associated with monitors rather than laptops, but the ViewBook VNB120 is the latest in its line of low-cost ultraportables — it announced its first netbook, the VieBook (no, not a typo), at last year’s CES. The ViewSonic ViewBook VNB120 is a good looking ULV ultraportable that compares favourably with the Samsung X120. The battery life is better, but performance is worse — which is most important is for you to decide.
Single Review, online available, Medium, Date: 01/07/2010
Rating: Total score: 83%

71.5%: This rating is bad. Most notebooks are better rated. This is not a recommendation for purchase. 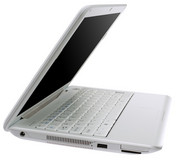