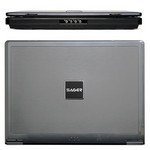 Reviews for the Sager NP9262

Archive.org version
Close your eyes and imagine the not-so-distant future. The Sager NP9262 offers us glimpses of the hardware we’ll see in mid-range gaming laptops in 2010 or 2011. Realistically though, the gamer of today can’t wait two years to get a hold of such a mind-bendingly powerful laptop. The Sager NP9262 is a breathtakingly fast machine even if you opt out on some of the extras. The Sager NP9262 has got goods that give Alienware’s flagship gaming laptop, the Area-51 m17x, a run for its money. A fully-loaded Sager NP9262 is the nuclear option of gaming laptops. Just be prepared to haul around an anvil’s worth of plastic, metal and circuitry.
Single Review, online available, Medium, Date: 10/01/2009
Rating: Total score: 80% features: 80%

Q9550: » Further information can be found in our Comparison of Mobile Processsors.