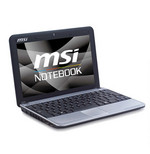 Reviews for the MSI Wind U115

87% Review MSI Wind U115 Hybrid Luxury Netbook | Notebookcheck
The Long-Distance Runner. The Wind U115 Luxury is a netbook alternative from MSI, which attracts attention especially due to its built-in components and a promised long-life battery. An Intel Atom Z530 CPU, an Intel Poulsbo chip set with a GMA500 graphic chip set and a built-in SSD memory unit in addition to the hard disk is supposed to bridle the energy requirement especially effectively in mobile mode. If this works is shown in the following test...
MSI Wind U115 Hybrid
Source: Netbookchoice

The MSI Wind U115 has so many things going for it. The netbook has by far the best battery times seen in a netbook so far, a solid and comfortable keyboard, a great matte display, as well as a fully featured spec-sheet. The U115 wraps all of this up in a chassis no bigger or heavier than other 10-inch netbooks running with 6-cell batteries. In fact, we have to commend the MSI engineers for packing in so much tech and keeping it all running very cool and quiet.
Single Review, online available, Very Long, Date: 07/27/2009
Rating: features: 80% display: 90% mobility: 90% emissions: 90%

Intel Graphics Media Accelerator (GMA) 500: Integrated (onboard) graphics chip on the UL11L, US15L, and US15W chipsets with a licensed PowerVR SGX core. DirectX 10.1 support but because of low clock rates (100-200 MHz UL11L - US15) and only 4 shaders not suited for 3D games. The integrated video decoder accelerates the playback of HD videos (MPEG2, VC-1, AVC).

Power saving version of the Atom N270 with additional Virtualization Support and more power saving techniques. The performance is equal to the N270 and therefore only suited for basic tasks.