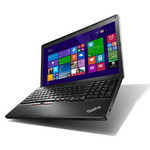 The Lenovo ThinkPad Edge E545 brings a premium look and feel without a premium price. Its AMD A6 processor is well-suited to running basic home office and light multimedia apps, but don't count on its Radeon GPU to run graphics-heavy games smoothly. It would be nice if the E545's screen ran at 1,920-by-1,080, but that's a rare feature for a budget laptop. That said, longer battery life and a 500GB hard drive (rather than the included 320GB drive) are reasonable requests.
Single Review, online available, Very Short, Date: 11/19/2014
Rating: Total score: 70%

AMD Radeon HD 7640G: Processor graphics card that is built into the Trinity A8 series APUs from AMD. Based on the VLIW4 architecture of the Radeon HD 6900 desktop series.