Reviews for the HP TouchSmart IQ830

Few computers users would have any hesitation in recommending the IQ830. It is sleek, quiet, and has only one wire (albeit tethered to a substantial power brick). Sadly, the price is too rich for most and hardcore users will demand more performance. The main reason for buying this type of machine is simplicity and space saving - it makes tower systems looks antiquated. You’ll be up and running in no time at all with the IQ830 and there’s always the helpful printed User Guide to help you out should you get stuck. If you don’t mind splashing out about £400 more compared to a regular desktop machine with a good 24-inch monitor, the IQ830 is sure to impress.
70
Single Review, online available, Medium, Date: 06/17/2009
Rating: Total score: 70%

NVIDIA GeForce 9600M GS: Slower clocked 9600M GT and therefore a bit slower and cooler. In conjunction with an 9100M the 9600M GS is able to use HybridPower to save current. 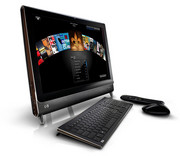 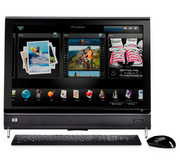