Series: The HP ProBook 650 Series consists of mainstream notebooks designed for business use. The models are largely made of plastic and are sturdy and stable. In addition, they are slim and lightweight with a weight from 2.32 kg. The 15.6 inch display either features a resolution of 1366 x 768 pixels or 1920 x 1080 pixles. Users are given the option to customize performance with a wide range of Intel Core processors, up to 16 GB and an internal storage capacity of up to 1TB. With graphics rendered by the Intel HD Graphics 4600, its capacity to deliver stunning visuals is unquestionable. Some models use a dedicated AMD RadeonTM HD8 8750M (128-bit) with 1 GB GDDR5 VRAM. Sound quality is beyond average thanks to HD Audio with DTS Studio Sound.

An appealing feature of the Probook 650 series are its security features. It is enhanced with HP BIOS protection, which protects the laptop from virus attacks to the BIOS as well as other security threats, and is also designed to help prevent data loss and reduce downtime. There are plenty of interfaces including an HDMI port, 5(!) USB 3.0 ports (one charging), 1 DisplayPort, 1 VGA as well as a combo audio jack. In addition, there is a media card reader on board. The battery life depends on the selected hardware and battery option.

i5-7200U: Kaby-Lake based SoC with two CPU cores clocked at 2.5 to 3.1 GHz, HyperThreading and manufactured with an improved 14nm process.» Further information can be found in our Comparison of Mobile Processsors. 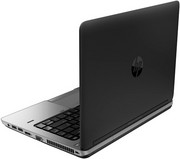