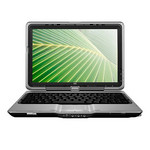 Reviews for the HP Pavilion tx1138ea

80% Is the tablet making a comeback?
Source: Pocket Lint

The HP Pavilion tx1138ea is an interesting idea and one we enjoyed playing with. If you like to carry your notebook around with you and can see the logical use of having a touchscreen, this is a pleasingly affordable and powerful device. The only fault we had with it was the choice of screen, as it simply isn’t up to the job of watching movies on.
eher kurz gehaltener Test; online abrufbar

NVIDIA GeForce Go 6100: The NVIDIA GeForce Go 6100 / 6150 is an integrated graphics card of the NVIDIA nForce Go 430 MCP for AMD Turion notebooks. It doesn't have any integrated memory, but uses a part of the mainmemory (up to 128 MB) like the direct competitor Intel GMA 950. Therefore, the gaming performance is quite moderate and can only be used for elder games.