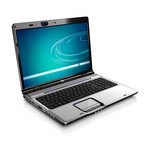 Reviews for the HP Pavilion dv9750us

HP Pavilion dv9750us is a very strong multimedia notebook for those looking for a high definition playback notebook. The inclusions of the digital TV tuner card and Blu-ray drive provide these features. The drawbacks is that the system is a bit underpowered compared to similar priced system. This is the cost to consumers for the multimedia features.
4 von 5, Leistung schlecht, Display mangelhaft
Single Review, online available, Very Short, Date: 01/15/2008
Rating: Total score: 80% performance: 40% display: 50%