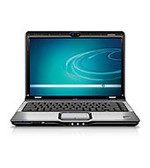 Designed for multimedia users, HP's Pavilion laptops have always combined eye-catching looks with such entertainment-oriented features as touch-sensitive media controls and dual headphone jacks. Those features trickle down into even the smallest Pavilions, including the 14.1-inch dv2915nr. At 5.5 pounds, the dv2915nr is well sized for students who want a screen that's big enough for multitasking but small enough for frequent trips across campus. The HP Pavilion dv2915nr is an attractive and affordable 14.1-inch laptop that will serve your needs through four years of study. The disappointing battery life gives us pause, however, on this otherwise well-rounded laptop.
6.6 von 10, Leistung gut, Mobilität mäßig
Single Review, online available, Medium, Date: 07/10/2008
Rating: Total score: 66% performance: 80% mobility: 60%

HP's 14-inch HP Pavilion dv2945se looks like it should cost more than $899, thanks to a cool subtle pattern on the keyboard tray and lid (the "se" in the name stand for special edition). We've seen the same upscale look recently in the very similar HP dv2700t Special Edition. For about $900, we'd be tempted to look elsewhere for an Intel Core 2 Duo CPU, rather than the underperforming AMD Turion 64 X2 TL-60 found here. The 14-inch HP Pavilion dv2700t Special Edition looks like a much more expensive laptop, but you can also find a more powerful 14-inch laptop with better battery life for less money.
5.9 von 10, Leistung schlecht, Mobilität mangelhaft
Single Review, online available, Short, Date: 07/24/2008
Rating: Total score: 59% performance: 40% mobility: 50%

68.33%: This rating is bad. Most notebooks are better rated. This is not a recommendation for purchase.