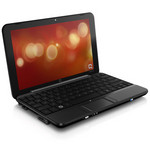 Archive.org version
HP's Compaq Mini has one of the best keyboards available on a netbook, but the touchpad still frustrates. Overall, the Compaq Mini 702EA is a very impressive netbook with a fantastic keyboard, tiny dimensions and great portability. It is slightly flawed, however, and with a redesigned touchpad and a few more ports, it would have been one of the best netbooks available.
80
Single Review, online available, Short, Date: 05/27/2009
Rating: Total score: 80%