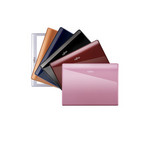 Reviews for the Fujitsu M1010

Archive.org version
We're so used to seeing netbooks in the PC Authority offices, after having seen twenty or so arrive on our desks over the last year, that we watch each new netbook keenly for standout features that will lift it above the pack. There's plenty of possibilities to go round, from outstanding screen resolution or quality, to graphics addition, to feature-packed goodies and ergonomics. In all, given that this is on the smaller end of the netbook range, this is a decent machine, but it doesn't have the class of the Lenovo S10 we saw last issue and the price is $642 - only $10 less than the S10. The warranty is its biggest strength, and it should sway anyone considering a 9in netbook, but it doesn't have the battery life or ergonomics of the EeePC 901.
Leistung 80, Ausstattung 80, Display 90, Ergonomie 80
Single Review, online available, Medium, Date: 03/06/2009
Rating: performance: 80% features: 80% display: 90% ergonomy: 80%
60% Fujitsu M1010: a compact little critter
Source: APC Mag

Archive.org version
We really are spoiled for choice when it comes to netbooks, and as a result it’s very hard to get excited about the M1010 as it just doesn’t offer anything which hasn’t been done before. And because most netbooks are so comparable in terms of specification and performance and occupy such a narrow price range, it’s much easier to get put off by pedantic things like aesthetics and small keyboards. The best thing to say about the M1010 is that it’s an average netbook, and if you like the look and feel then apart from the 4-cell battery there’s absolutely nothing wrong with it. But given the plethora of netbooks on the market, there’s nothing which marks which unit as a stand-out.
von 10: 6, Preis 5, Ergonomie 7, Leistung 7, Mobilität zufriedenstellend
Single Review, online available, Medium, Date: 01/08/2009
Rating: Total score: 60% price: 50% performance: 70% mobility: 70% ergonomy: 70%