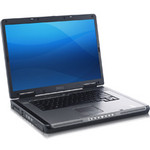 Reviews for the Dell Precision M90

I am very pleased with the Precision M90. I have yet to have any problems with it. It is a very strong performer as well. In my opinion, this is the perfect notebook for anyone looking for a strong 3D modeling machine with a good build. I would also recommend this to anyone looking for a professional looking and responding notebook with plenty of power for gaming. However, it can be quite pricey (though I would say usually cheaper than an XPS M1710), so if you're looking for just power, you may want to look elsewhere. And if you're just into gaming, you may want to know that the Quadro has problems with some games, and is indeed much more expensive than its Geforce counterparts.
umfangreicher Erfahrungsbericht eines Benutzers; online abrufbar

Dell latest mobile workstation, the Precision M90 (from £1487), looks like most other laptops from the company but offers unprecedented portable workstation performance. Sporting all the application certifications and assured reliability that professional workstation users demand (it’s certified on some of the industry’s most demanding CAD, CAE, DCC, GIS applications), the Precision M90 is perfect for engineers, artists, developers and other professionals who need to work on business critical applications on the move. The Precision M90 is pitched squarely at content creators, graphics professionals and anyone who needs sheer brute computing force and high-end graphics. The laptop is certified by no less than 31 independent system vendors, which means the laptop will run the like of 3DS Max and all of Adobe’s software without a problem.
eher kurz gehaltener Test; online abrufbar

88%: This is a good rating above average. Nevertheless you should not forget, that 10-15% of all notebook-models get a better rating.